“Crazy is doing what you love, what you think you’ve been put on earth to do, every day, paid or not, and believing the money will follow – Except it’s not crazy, because it works.”

“Somebody who listens to their own guidance and goes the way that actually feels correct to them because without realizing it we have a tendency to look at the people around us and see what they’re doing and kind of copy off their paper. I don’t mean it as a type of cheating. I mean somehow we’re trained as we grow up to stay inside the norm cos it’s safer in there, and I think if we just really do what we think is our calling to do. When I was a struggling author, when I wasn’t really published and I wasn’t making money as an author but I was doing what I loved to do all day long, it really struck me how unusual that made me. How few people I knew were getting up and doing what they loved all day long. It’s almost a defiant act all in itself, to follow your bliss instead of doing that compromised responsible thing.” 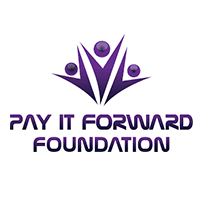 WHY CATHERINE WAS INTERVIEWED

I was explaining the term Pay It Forward to Maverick Luke Hemmant whilst interviewing him and wanted to send him a trailer of the movie and came across the Pay It Forward Foundation. When I contacted them they connected me with Catherine and she loved the idea of the project. Catherine is kind, honest, true to herself and inspirational.

“I think it must be. I think the thing you learn about creativity is to be there when it calls. Not so much what it is or how to make it work but just, I mean I can’t really explain electricity to you either and I can’t see it but I know to flip the switch when I want it to come on. And I’m not saying creativity can be worked like a switch, I’m just saying there are things you know about it and then things you don’t. But I do think that not being a maverick, that sort of toeing a line is anti-creativity. I think to me when people write and it kind of misses, people are writing something and it kind of misses, it misses me anyway. I get the distinct impression that it was written between their left and right ear and they really kind of constructed this in their brain, and I think that’s what we’re encouraged to do. We’re encouraged to just take control of the situation and bring our human resources to it. And so I think that there’s a place to really dip into creativity you have to get outside of what they tell us to do. Innovation is synonymous because innovation has to be something that isn’t what everybody’s been doing all along. So it’s pretty hard to toe the party line while doing something that nobody’s ever thought to try.”

“It’s hard advice to follow.  Look more closely at the part of you that’s afraid of being criticised.  Nobody likes it.  To this very day I don’t like being publically criticised.  You have to look at that and say, in what way is this damaging me really?  We have some very ancient knee jerk reactions to things, like I think there was a time when we lived very tribally and to be ostracised from the community would really kind of equal death.  So we have this deadly fear that people are going to disapprove of us.  I don’t really think it has much common application to our lives today, so just look more closely at this situation.  Why do you avoid criticism so staunchly?  And is there anyway you can just not like it but also not go to any lengths to avoid it.  Because it’s very limiting and mavericks get beaten down by what other people think…There was a time in my life definitely when I felt that call of wanting everybody to like me and I felt a very definite shift when I realised that there is limited value being liked by people you don’t like, or being approved of by people whose lives you don’t admire.  So I went from wanting to be liked and respected by everybody, to wanting to be liked and respected by people I like and respect.  I would very much suggest that shift to anyone, because there’s a level at which if I’m pleasing an unscrupulous person I’m doing something wrong.”